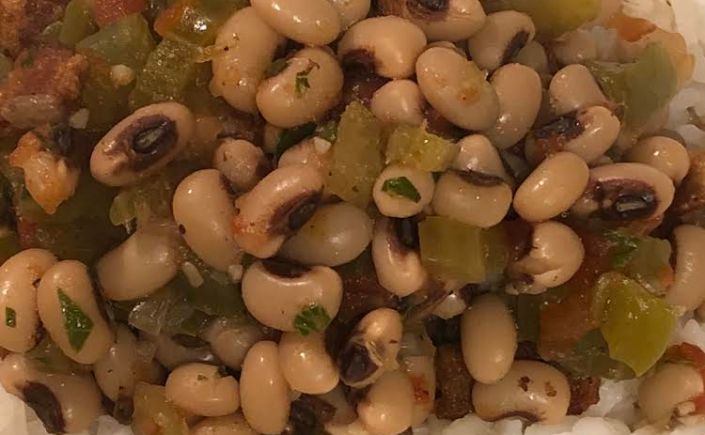 I don’t remember having Hoppin’ John when I was little. The only memory I have of blacked eyed peas wasn’t very pleasant. I can’t remember who prepared them, or where I was. I know it was around New Year’s Day or a little while after. All I can remember about them is they tasted gross and dirty. It’s funny how those things we found disgusting as a child are now delicious to us as adults.

The history and lore of this dish is unclear. Like many recipes from the South that predate the Civil War, they are loaded with speculations, rumors, and tall tales. Now, y’all know we like our tall tales and gossip. They pair well with our sweet tea, mint juleps, and front porch swing talking. I’m going to share a few of my favorites with you:

Now, I can’t say for sure if any of those named this recipe. It way more fun to let your imagination run wild.

As with most of the recipes I share, this is my spin on Hoppin’ John. The only true, set in stone ingredients are pork, rice, and the black eyed peas. That’s it. The pork can be anything from bacon, ham, or fat back/salt pork. Some recipes say to cook the peas, and then add the rice to the pot like you would for Jambalaya. I did not do this. I prepared my rice separately to keep it from getting mushy or ending up with a dry dish. There’s nothing worse than dry beans and rice. The choice is yours to make.

salt and white pepper, to taste

Heat a large dutch oven over medium heat. When pan is hot, add the bacon, and cook until crispy. Drain off all the rendered fat except 2 tablespoons. Add the onions, celery, green bell pepper, tomatoes, and garlic. Cook, stirring constantly, until the vegetables start to soften. Add the drained and rinsed black eyed peas, the bay leaves, and the Cajun seasoning, stir well. Pour the chicken broth over the black eyed peas, stir well and bring to a boil. Once the peas come to a hard boil, reduce the heat to medium low, and allow to cook for 90 minutes, or until tender. Remove the bay leaves and stir in the minced parsley. Taste and season with salt and white pepper, if needed. Serve over cooked white rice.